The great church or Our Lady Church

A smaller church had first stood at the site of the current church,. A new church was built in the middle of the 14th century. Only the bottom of the tower remains of this today. After its elevation to collegiate church in 1409, considerable building activities took place. After the city fire of 1452, work started on the construction of the current nave and transept.  Probably under the direction of master builder Evert Spoorwater.

In the second half of the 16th century, the Reformation had an increasing effect on Tholen. The church was ‘broken into pieces’. The gateway, that must have been richly decorated with sculptures, was completely stripped of them. In 1577 the church passed into the hands of the Protestants.

The more than 100 gravestones are certainly worth seeing, the oldest of which dates from 1421. Mummies are housed in a cellar below the north gate. These are the naturally preserved remains of members of the Van Vrijberghe family, who held posts on the city council in the 17th and 18th century.

(Kerkstraat 15) The guesthouse, dedicated to St Lawrence, was founded in 1312 for the provision of accommodation to poor travellers. The chapel of the guest house was built shortly after the big city fire of 1452. During the Eighty Years’ War, soldiers were nursed here and the chapel was also used as a storage room. The chapel was again used for housing wounded soldiers in 1747. In 1631 the chapel was sold to a carpenter. The chapel was later split into three separate houses. In the 1970s, these houses were restored and converted back into a single chapel. 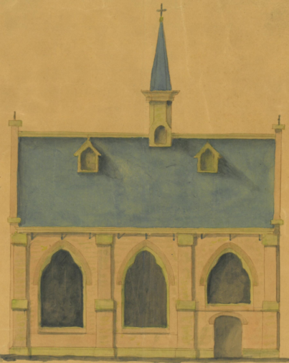 (Markt 22) In 1577, during the Reformation, the great church switched to Protestant hands. It was not until 1795 that permission was given for Roman masses to be held again in Tholen. These were first held in a house in Dalemsestraat.In 1818, the Catholics bought the old Walloon church (the medieval meat hall). This old church was demolished at the end of the 19th century, and a new one was built in the same place, in neo-Gothic style. This Our Lady of the Assumption Church was consecrated by the Bishop of Haarlem on 19 November 1900. 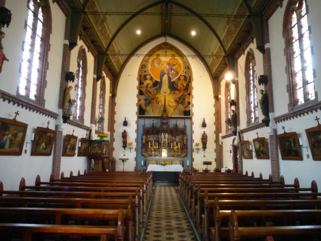 (Hoogstraat 12) The town of Tholen came into being in the first half of the 13th century. The village was granted city rights in 1366. In 1452, Tholen was hit by a large city fire. Around 1460, construction of the new ‘scepenhuus’ (town hall) started. The first chimes consisted of 14 bells; nowadays 37 bells hang in the town hall tower, the oldest of which dates from 1458.  The town hall contained a number of rooms: the Vierschaar (court room); the Politiekamer (police room) and the Weeskamer (orphans’ room).  After the municipal redivision in 1971, its function as a town hall came to an end. The platform in front of the town hall was designed in 1758 according to a design by Nicolaas Muts, who also designed the city pump. The local bandstand has disappeared from many towns and villages. But not in Tholen. The local brass band was given the bandstand in 1894, on the occasion of its 10th anniversary. It was initially a mobile stand, but in the thirties the stand was put on a permanent concrete base.

This shoeing shed is reminiscent of the smithy that was located on Markt (no. 10-12).  The shoeing shed was next to the forge. Before the war, the shoeing shed was converted into two sheds. A large blue millstone was incorporated into the pavement, that had been used by the blacksmith to lay the red-hot iron rims around wooden wagon wheels. After cooling with water, they set tight around the wooden wheels. 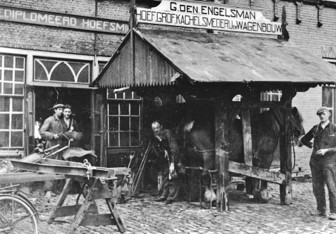 As in most places, there was first a well here on the market square, where the inhabitants could draw water from the ‘Borneput’ well. Around 1760 a real city pump was built here, in Louis XV style. The stonemason was Nicolaas Muts of Middelburg. 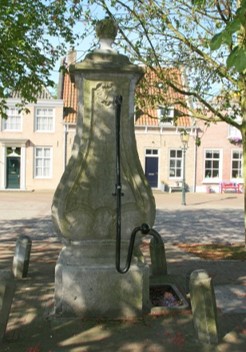