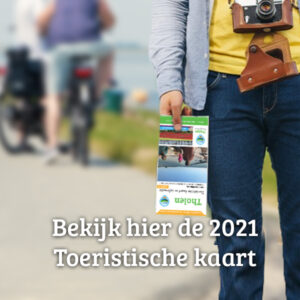 The island of Tholen was bisected by the Pluimpot until the 16th century. This estuary was dammed in 1556.
Ships accessed the town and Scherpenisse through the Pluimpot.
In the Zeeland island area, passengers and cargo were transported by barge operators who sailed to Middelburg, Zierikzee, Bergen op Zoom and Rotterdam at set times. For centuries, transport by water was many times faster and easier than it was on unpaved roads.
The main incoming cargo was peat, and the main outgoing cargo agricultural products. In the second half of the 19th century transport by ship, especially of sugar beet, became increasingly important. In 1866, 15 ships of 16 – 89 tons had their home port here. By around 1900 this had risen to 39. In the 1930s, shipping traffic declined sharply due to competition from lorries. 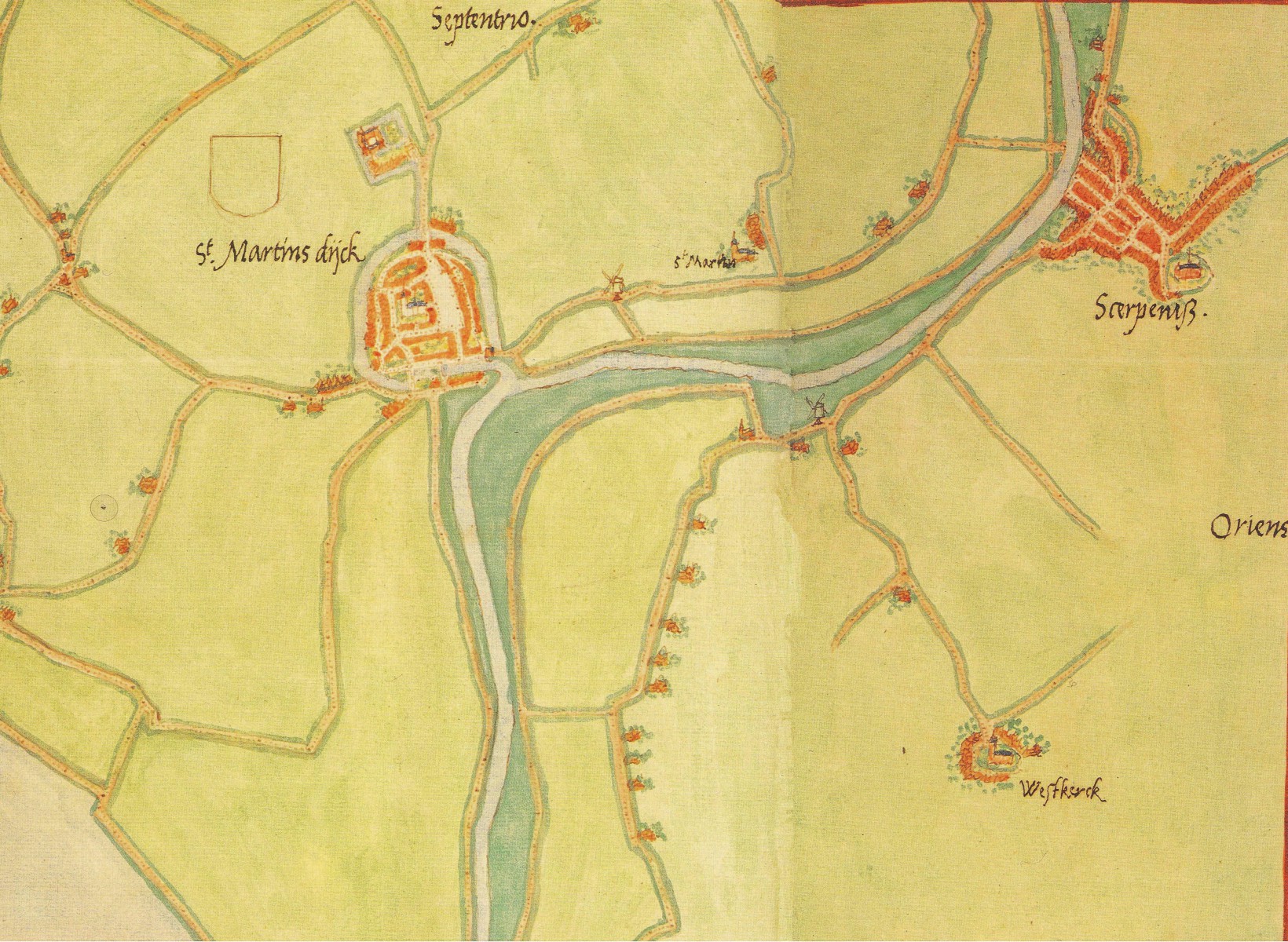 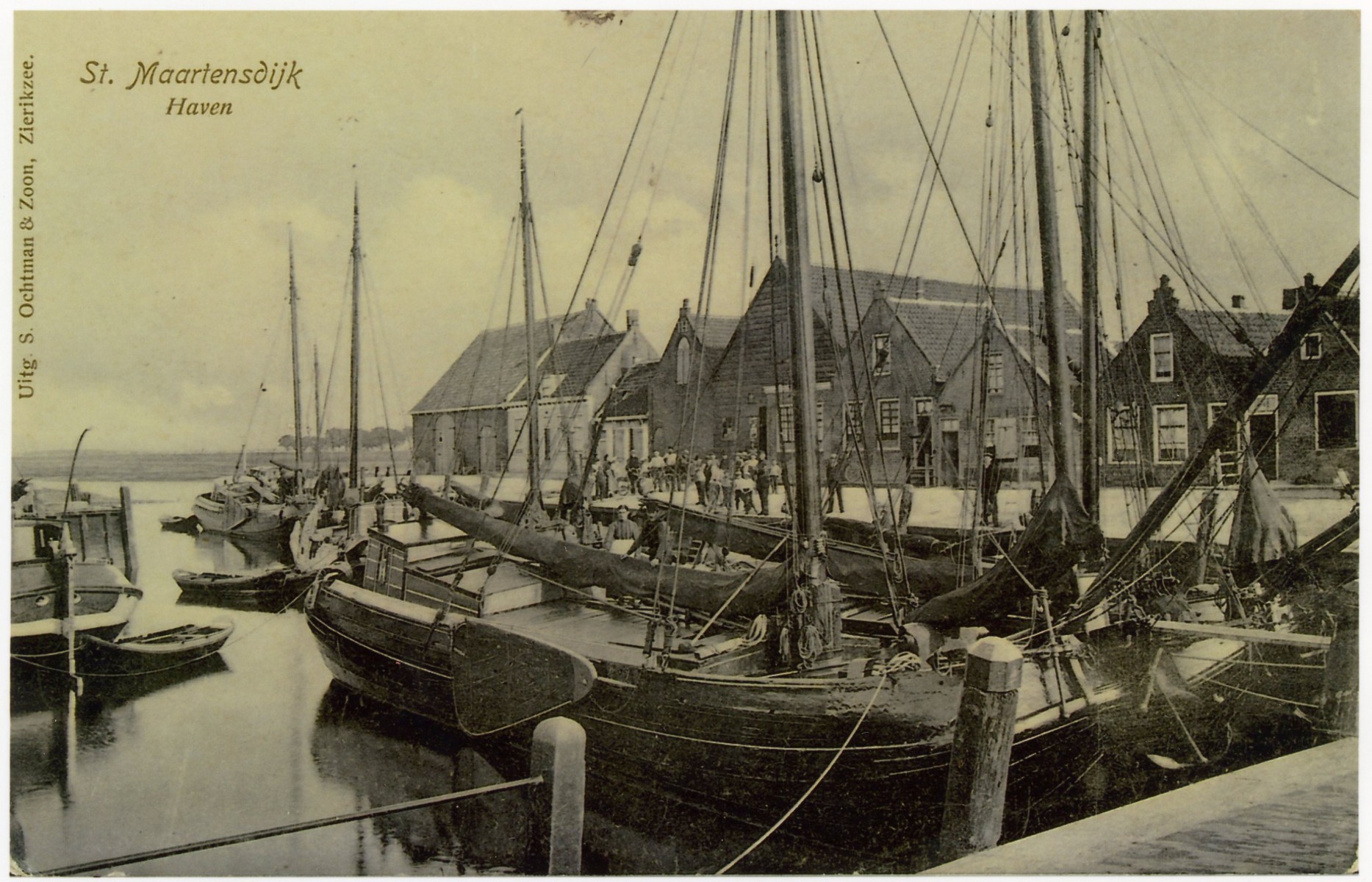 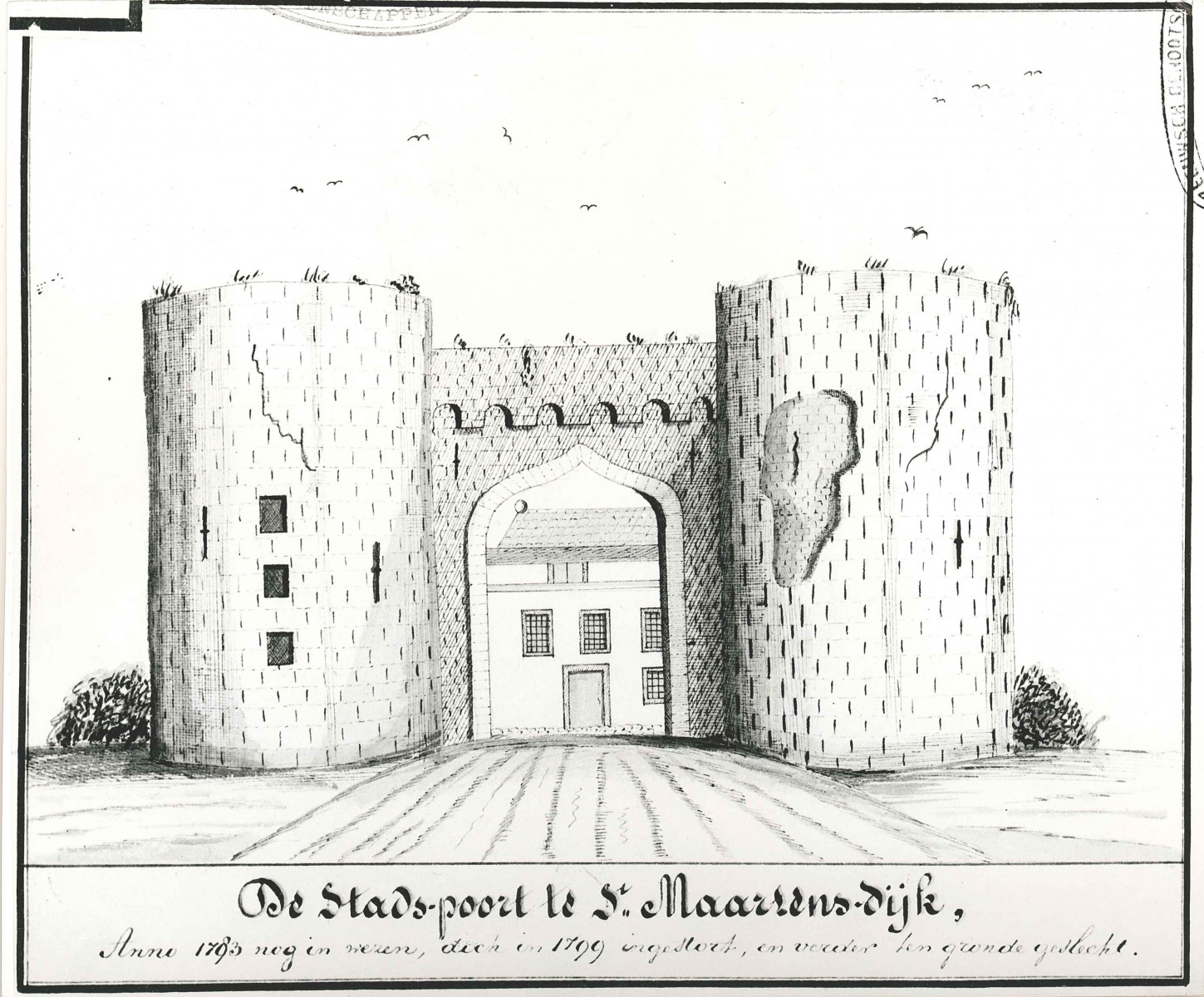 Shortly after Sint-Maartensdijk obtained city rights, wall and ramparts were built around it. Gates were built across the three access roads. The Westpoort was demolished after it collapsed in 1799. The foundations were excavated in the 1980s, and the contours were then incorporated into the street pattern.

In order to keep the harbour deep enough for the ships, the harbour had to be flushed with water regularly. A separate tidal sluice was installed for this purpose, which released its water into the harbour when the tide was going out, so that the sand flowed out with it. By 1807, this sluice was already silted up. In the mid-19th century there was a huge demand for new homes. Small houses for workers were therefore built into the old sluice at that time. However, these were of poor quality. Water drainage was also poor, due to the low location. When the Housing Act came into force, these homes were designated as poor quality, and soon afterwards were demolished. 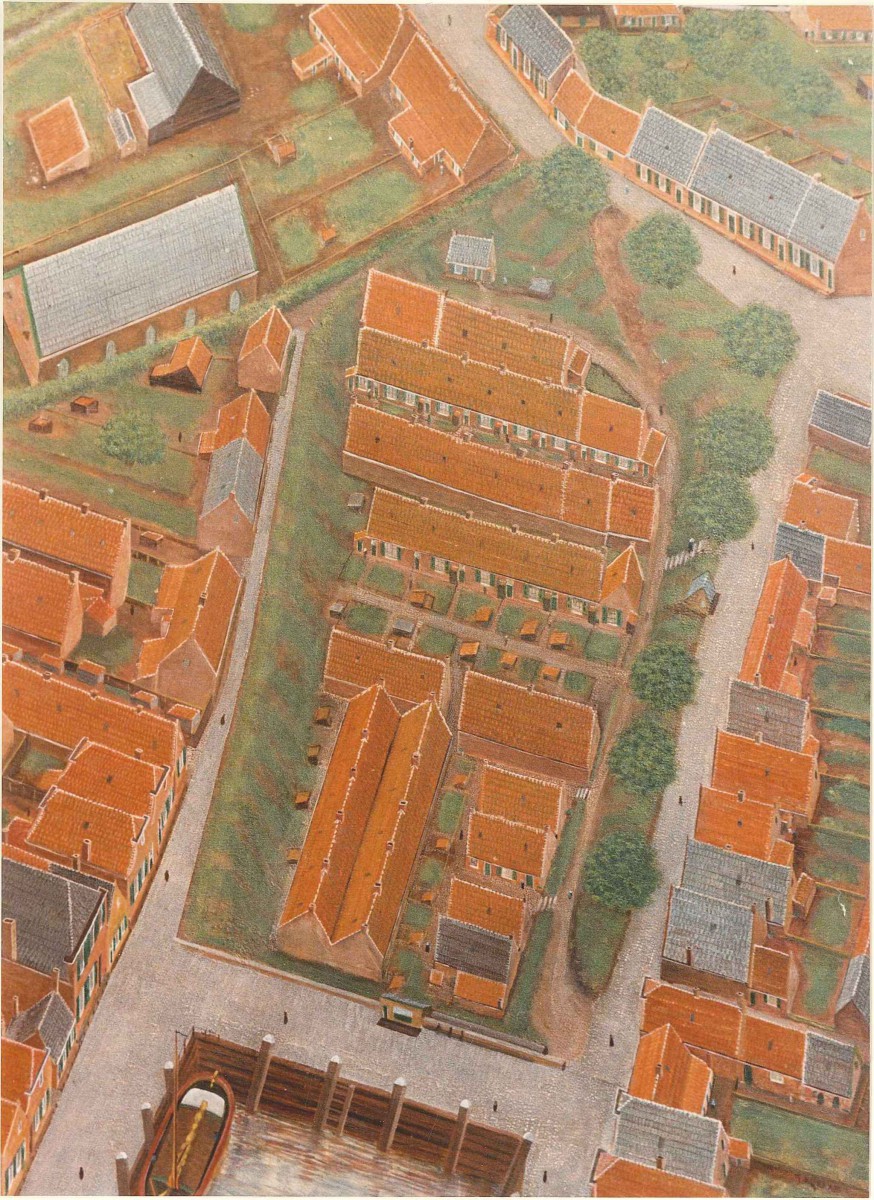 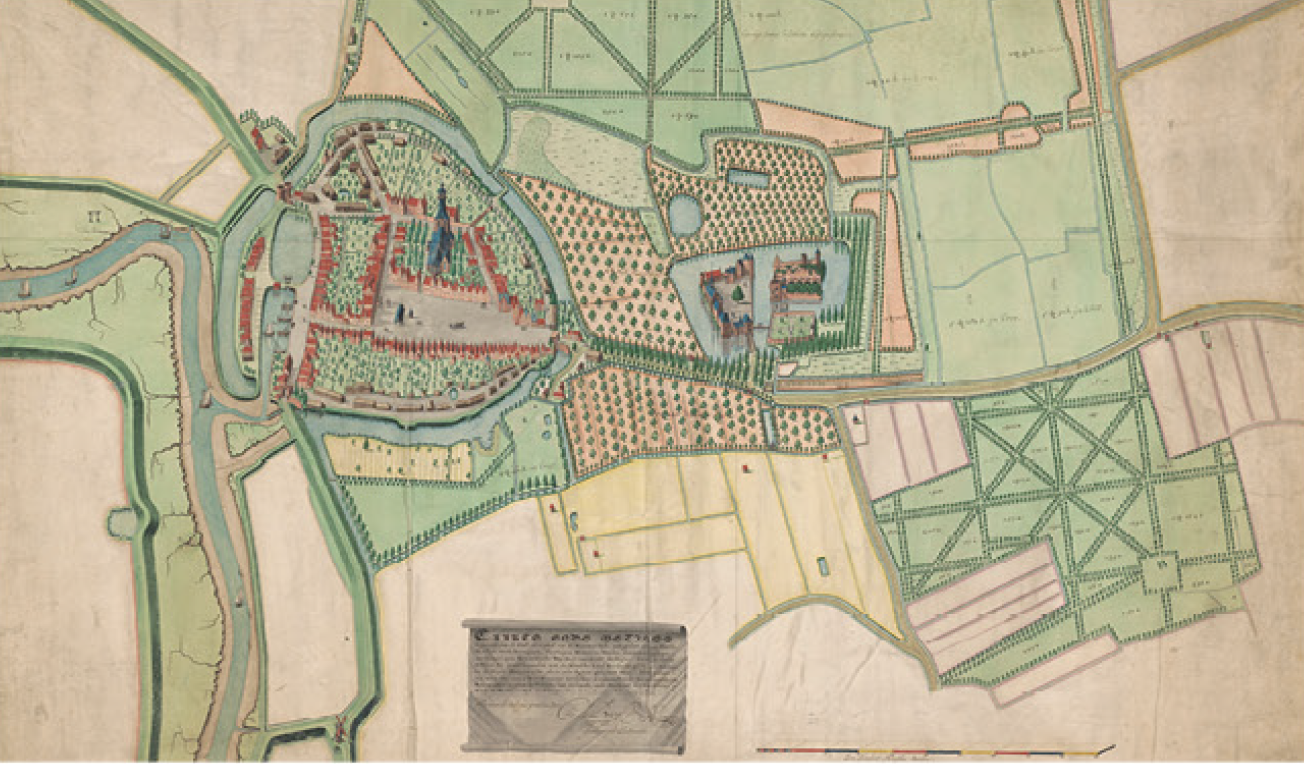 In the storm disaster in 1953, the port proved to be a weak spot in the seawall. The ‘coupure’, or cutting, which was meant to hold back the seawater at the top of Kaaistraat, collapsed with the result that seawater flooded the lower part of the town. Although nobody died as a result, there was widespread damage. Four years later, the 3 km long Pluimpot was closed off at its mouth, after which the harbour was filled in in 1962. The shipping channel between Sint-Maartensdijk and the dam became an area of natural beauty. With government support, an industrial park was built, to combat high local unemployment. The first business established itself here in the same year. This area was greatly expanded in the 1980s, including in the context of the foundation of multi-company buildings intended for starting entrepreneurs. 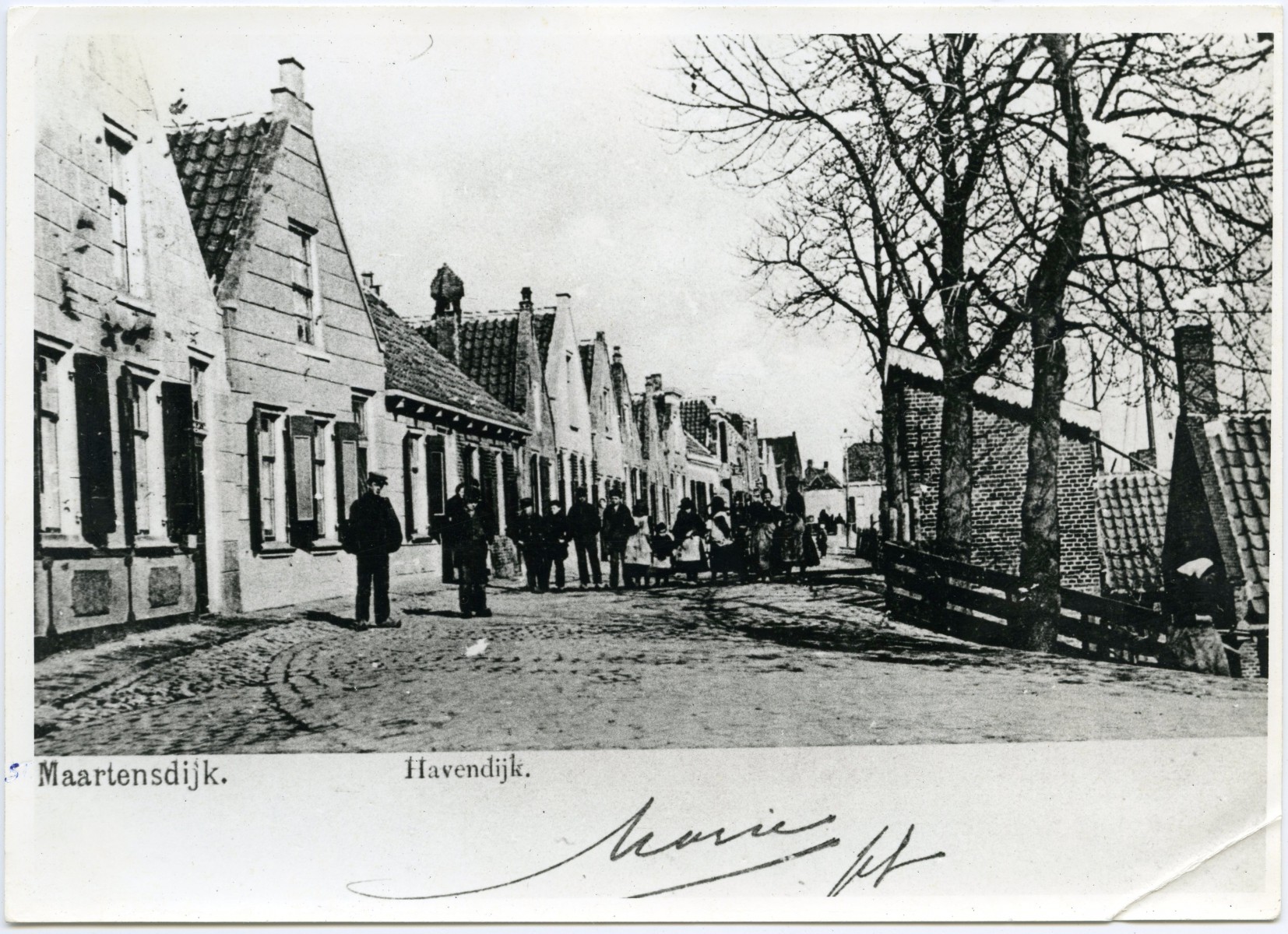 Originally salt marshes In the 1840s, the prices of flax and rapeseed increased. A large…